"A lie gets halfway around the world before the truth has a chance to get its pants on." - Sir Winston Churchill

"A lie gets halfway around the world before the truth has a chance to get its pants on." - Sir Winston Churchill
navigation
EXHIBITS

Are we alone? Where did Earth come from? These age-old questions are the focus of this website. It is based upon the themes fand resources from the 3,000 sq. ft. Alien Earths: Searching for Planets and Life Around Distant Stars exhibition produced by the Space Science Institute. It began its tour in 2005 at the Lawrence Hall of Science. Scientists use space- and ground-based observatories to understand the origin and development of galaxies, stars, planets, and the conditions necessary to support life. Like the search for distant planets, the search for life beyond Earth requires enormous creativity. More than 3,000 planets have now been identified outside our Solar System (including super earths), but no one has yet found evidence of life on those worlds or elsewhere in space. The website is divided into the following areas: Our We Alone, Star and Planet Formation, Planet Quest, and Search for Life. Several SciGames interactives are from this exhibition.

Since Galileo first glimpsed the rings of Saturn in 1610, the beauty of the outer Solar System’s giant planets – Jupiter, Saturn, Uranus, and Neptune – has captivated us. Now scientists are seeing beyond their beauty to gain a deeper understanding of their importance. Tools such as the Hubble Space Telescope, the Keck Observatory, and the Juno mission to Jupiter are helping us understand the origins of our Solar System and the formation of stars and planets. The giant planets were instrumental in the formation of Earth and its habitability. This website is based upon the themes and resources from the 3,500 sq. ft. Giant Worlds: A Voyage to the Outer Solar System exhibition that was produced by the Space Science Institute. It began its tour in 2008 at the Orlando Science Center. The website is divided into the following areas: Family of the Sun, Meet the Giants, and New Frontiers. Several SciGames interactives are from this exhibition. 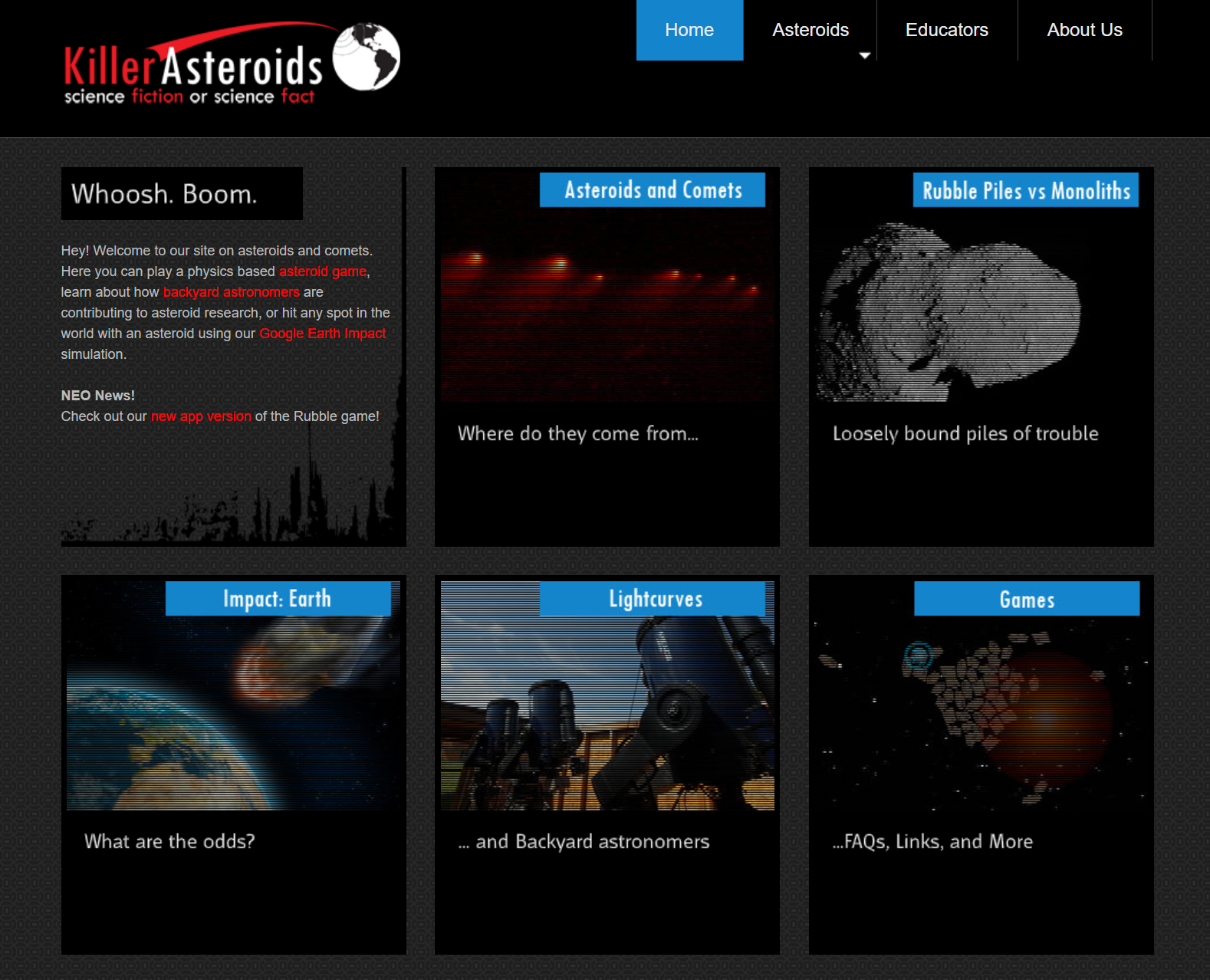 Ever wonder what the difference was between an asteroid and a comet or how big a risk an Earth impact really is? The public is fascinated with space rocks (asteroids, comets, and meteors). Recent encounters with them are a reminder that our Solar System is a very dynamic place. Earth has been hit many times in the past (Remember the dinosaurs?) and we will be impacted in the future. Asteroids and comets aren’t just the subjects for movies like Deep Impact; they’re also the subjects of intense scientific research. This website is based upon the themes and resources from the 4,000 sq. ft. Great Balls of Fire: Comets, Asteroids, and Meteors exhibition produced by the Space Science Institute. It began its tour in 2011 at the Science Museum of Virginia. At killerasteroids.org you can play a physics based asteroid game, learn about how backyard astronomers are contributing to asteroid research, or hit any spot in the world with an asteroid using our Google Earth Impact simulation. 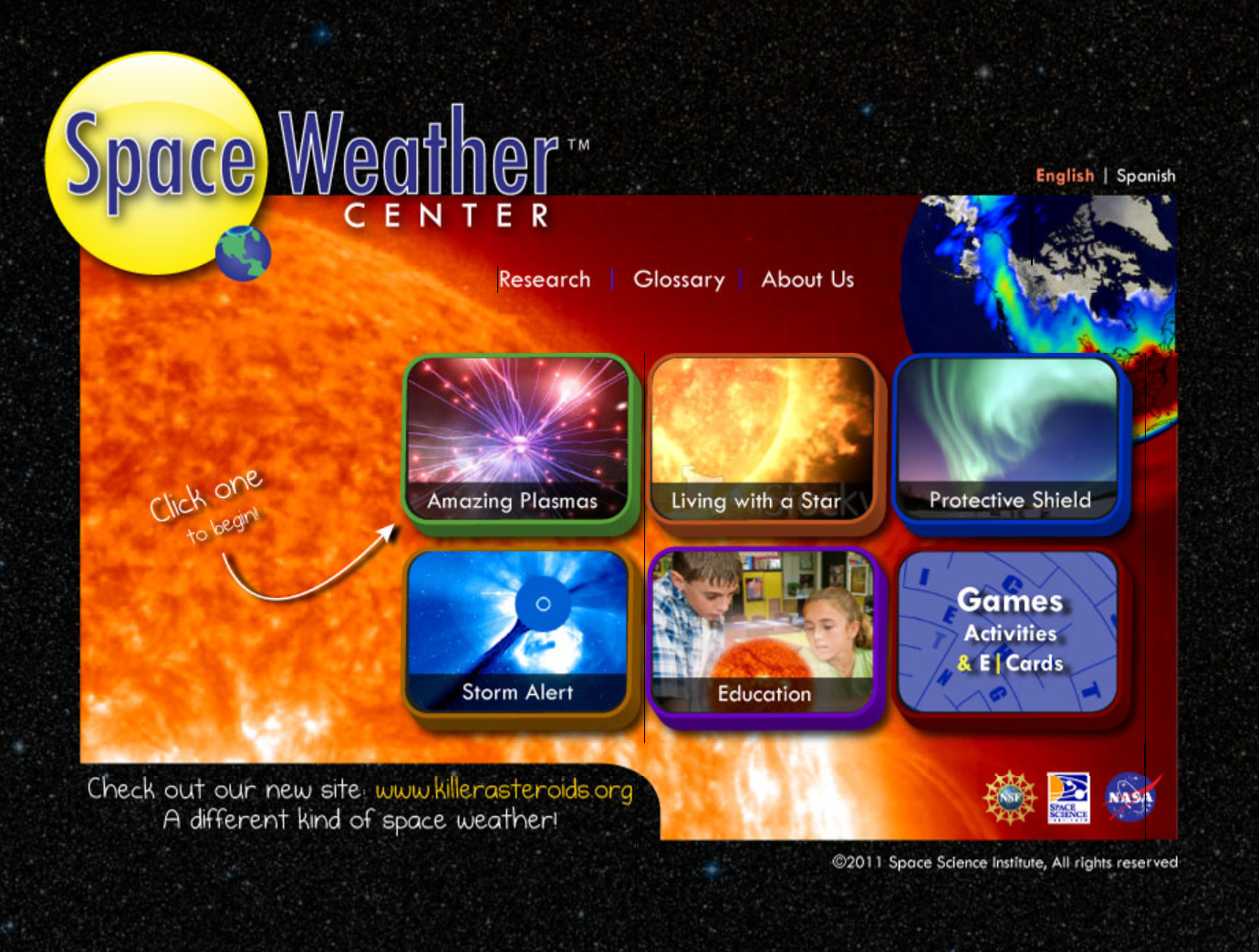 Our Solar System has the cosmic equivalent of wind, clouds, storms, and hurricanes called space weather. It’s one of the consequences of living with a star. The Solar Wind and solar storms like Coronal Mass Ejections (CMEs) can impact Earth’s magnetic field region causing geomagnetic storms, the aurora, ionospheric disturbances, and electrical power failures. The Solar Wind pushes and stretches Earth’s magnetic field into a vast, comet-shaped region called the magnetosphere. The magnetosphere and Earth’s atmosphere protect us from the Solar Wind and other kinds of solar and cosmic radiation. This website was developed as part of the Space Science Institute’s Space Weather Outreach Program. It includes the following areas: Amazing Plasmas, Living with a Star, Protective Shield, Storm Alert, and Research. Several SciGames interactives are from this program.