"If you can't get rid of the skeleton in your closet, you'd best teach it to dance." - George Bernard Shaw

"If you can't get rid of the skeleton in your closet, you'd best teach it to dance." - George Bernard Shaw
navigation
FREE APPS
build solar systems, escape a star, save the world from asteroids

Drag and drop planets and stars to make your own solar system. The physics engine will calculate how gravity between all of the asteroids, planets, and stars affect one another while they move through space.

We can only send spacecraft to Mars every two years. Have you ever wondered why? This simple simulation lets you launch a spacecraft from Earth to Mars. All you have to do is decide when to launch and we take care of the amount and direction of thrust. Easy, right?

You know the “states of matter”, right? Solid, liquid, gas…. and plasma? Test your knowledge by sorting the falling objects into the appropriate bins. Be careful though: you’re only allowed a few mistakes, and each level will be faster than the last.

For teachers: You can use this with middle school science units on the states of matter. We’ve had reports of teachers projecting this activity, with students shouting out the answers.

It takes so long to get signals back and forth to Mars that you can’t just drive a rover, you have to program how you want it to move. See if you can get this rover to various targets. Each level will get a little harder, but we’ll give you more programming commands to help. And if you’d rather just draw in the sand, try the Free Play mode. 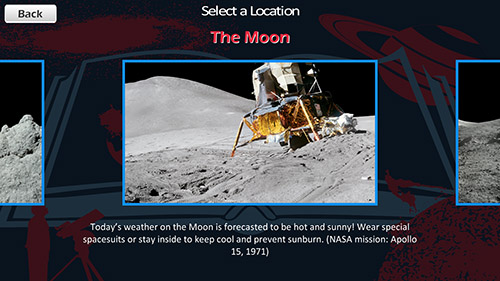 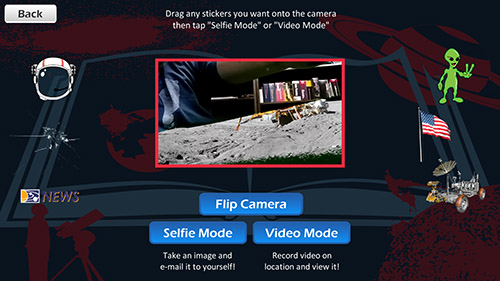 Use this app with a green background to take photos or videos on the Moon or Mars. This app was originally designed for use in library programs. For ideas and tips, visit http://clearinghouse.starnetlibraries.org and search for Space Stage.

Explore the Sun's features and see current solar images courtesy of NASA's Solar Dynamics Observatory. You can also get a preview of what you'll see in a total solar eclipse.

Asteroids can be single rocks, or clumps of smaller rocks held together by their mutual gravity. And a bunch of them are headed towards Earth! Your job: use bombs and impactors to deflect them away from Earth before time runs out. Humanity is depending on you! And remember: those movies where they just blow up the asteroid and the pieces don't matter? That doesn't actually work.

This is a simple, one level game built on the Box2D physics engine. Individual asteroids are attracted to each other by their mutual gravity in a physically consistent way.

For teachers: Rubble! can be used as an educational game to supplement classroom discussions on asteroids, comets, Earth impacts, and gravity as a universal force. Development was supported through grants by the National Science Foundation and NASA.

Build your own solar system. But watch out: even the gravity between planets can pull them out of position. For more about how this computer model works, and some things to try, try this one page handout.